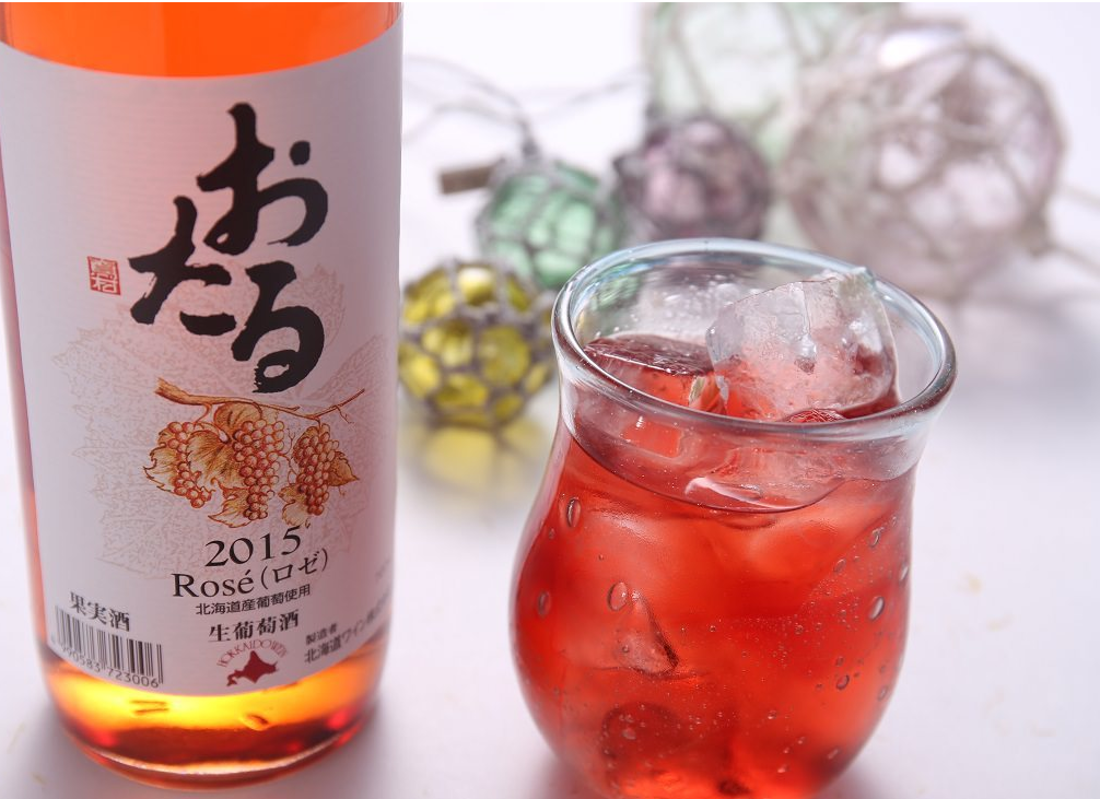 Wine making in Hokkaido began at the end of the 1960s but our winery was established in 1974. There are about 26 wineries in Hokkaido today. We are not the oldest winery but we are the biggest.
Our winery is built on a mountain hillside. The elevation here is about 225m. Here we have clean and cool conditions and we also have a great view of the nearby forest and the sea. Having a winery on a hill has three further special and important advantages.

The first advantage is that, although we can use cold natural water drawn from a well rising from mountain ground water, we don't use this water to make wine. Rather, it is used for cooling the fermentation tanks. That way we can control the temperature and protect the wine from outside heat.

The second factor is the slope of the mountain. Grapes arrive at the higher side of our mountain and then go to the start of the wine-making process. That is, pressed grapes move to the next processing stage by gravity only. No pumps are needed. This way the grape juice is handled with more care, which results in better wine.

The third and last factor is the very large amount of snow that we have in winter. Snow covers the tanks that we put outside. This accelerates the formation of "wine stones" in the tanks.We produce wine made from 100% Japanese grapes. We use between 2000 to 2500 tons of grapes every year. These grapes come from our own vineyard, and also from grape growers.

We have the biggest vineyard in Japan, the “Tsurunuma Winery” (447ha) , which is located in Urausu town about 100km from Otaru. However, we also contract with about 300 other grape growers in Hokkaido.

The grape harvest is from September to November and the grapes are carried by a truck to our winery. During the grape harvest, we receive 30 tons of grapes or more every day. Arriving grapes are put into buckets, called “Byutte,” which is a German word. One bucket can hold 500 kg of grapes.

During the grape harvest, we accept on average 60 buckets a day.
At the Tsurunuma winery, the grapes are picked by a harvester machine and are pressed as soon as they arrive at that facility. However we do not do the alcohol fermentation stage there. The grape juice is instead carried here by a tanker which has temperature control. The reason for this is that the Tsurunuma winery is 100 km from Otaru.

We have several series of wine. They differ in grape roots or the grape growing area.  Grapes have two roots. One comes from Europe and is called “Vitis Vinifera” and the other comes from America and is called “Vitis Labrusca.”
Our most famous brand is the “Otaru-series.” These wines are made fro “Vitis Labrusca.” They have a lovely natural flavor and taste just like fresh, juicy grapes. These wines are very popular, and in fact “Otaru Niagara” is our most popular wine.The “Hokkaido-series” is not so expensive but is always of high quality. This series is made from a single grape type grown by different growers. The Kerner is especially good with seafood such as Sushi or Sashimi. Our flagship wine is the “Tsurunuma-series.” This series is made from our own vineyard's late harvest grapes. The grapes are checked each time for quality and are harvested by hand. If the grapes and the wine do not reach the exacting quality that we require, we don’t produce this series.

Some wines are not produced every year. These are what we call “Limited produce wine.” If the autumn has been dry and very sunny, the grapes have a good ripening period. Furthermore, some of the grapes are affected by Botrytis-Cinerea, or what we call the “noble-rot.” Botrytis-Cinerea is a kind of fungus which makes the fruit shrivel and concentrates the sugars that are required to produce quality sweet wines. The wine will become sweet and luscious, and you can store it much longer.

And, 1996 is the 100th anniversary of the birth of Kenji Miyazawa, when this beer was named the GINGA KOGEN BEER. Famous water wells up to plateau on mountains and character shines out as if it were stars in night sky. Japanese name of the GINGA KOGEN BEER includes Galaxy and Plateau. Galaxy indicates“dream and roman” and plateau indicates “famous natural waterh” .

The preparatory members visited the beer breweries in Europe and the United States before building the brewery.They visited Munich, Cologne, and Dusseldorf, and drank 80 kinds of beer in one week. After discussion, they visited the Augustina brewery in Munich again.

This Weizen is the benchmark of the GINGA KOGEN BEER.
Its impression is clearly different from that of Japanese traditional beer and considerably characteristic without any need for convincing. They thought this taste might acquire the enthusiastic fans although they are minority.

Afterwards, we invited Braw Meister and purchased the set of the German machines.We made some samples.However, their taste did not reach our target or their quality was not uniform. We just took twists and turns. We thought that we could not make that taste with this material in this place. Repeated trial and error and bloody effort resulted in the birth of the good-quality Weizen beer.The very time when we created the taste that we aimed at is the emotional support for all the staff.

Sawauchi village with the breweries and Yuda town in Waga-gun in Iwate prefecture were incorporated into Nishi-waga town in November 2005.
This town is in the mountain range surrounded by Ou Mountains, which the backbone of Tohoku district, and its population is less than 8000. However, it has wide area (about 50 km north and south, about 20 km west and east) About 80 % of this town is covered with forest land such as native bush including the biggest beechen trees in Japan. The town has the heaviest snowfall area in Japan, so it is specified as “special snowfall area”. It has snow over 2 m deep sometimes in February.

Waga river connected to many rivers crosses the town north and south. There are mountains at about 1000 m elevation such as Waga-dake at 1440 m elevation in the north, and Minami-Honnai-dake called Gonso-yama or Gonsiro-mori at 1492 m elevation in the south, in the prefecture’s border with Akita prefecture.
The town has a variety of nature such as Kurikoma quasi-national park (nature conservation area), and Kinshyu-ko whose beautiful landscape changes seasonally and which is specified as the top 100 lake created by dam in the Yuda-Onsen-kyo prefectural natural park in the south.You may feel that beer brewing in Tohoku is strange. This area has much natural water at 9 ℃ on yearly average and is similar to Munich in Germany (the beer original place) in environment. So, this area where bacteria are unlikely to live is appropriate for beer brewing.

Nishi-waga town has the long history. For example, the paleolithic remains (18,000 years ago) were iscovered. And, this town, which is called “Thermal Town”, has hot springs in 12 districts. Rich hot spring water is used for cultivating turtles and the other purposes.There are swimming baths, sauna, and observation baths in the Toge-yama Parkland Oasis Spa in Kinshu-ko Service Area in the Akita Expressway extending west and east.

These baths are the symbol of thermal town.Hot spring is appended to Hot-yuda station, which is the entrance of uda-onsen-kyo where the people can relieve their fatigue of traveling by train and car.By the way, the signaler for informing you that train is coming near is established in the bathroom in Hot-yuda station, preventing you from missing your train. Please enjoy hot spring without annoying at the time.

This area has many specialty products such as Bakke bean paste cooked by using butterbur sprout, fungus including natural Grifola frondosa, Mukitake, and Nameko mushroom, mountain plant including Fuki and Udo, soup and noodles cooked by using turtles of Nishi-waga Industrial Public Corporation, fresh milk and milk products from cows which were nursed in wide ranches by local cattle farmers. These specialty products are produced with rich nature in Waga-dake and are very popular with visitors. You can enjoy the dishes cooked by using specialty products actually such as turtle noodles and turtle rice porridge and GINGA KOGEN BEER in the Kinshu-ko Service Area.If you are neither a driver nor a minor, we recommend that you drink the beer.

Weizen beer means wheat in Germany.This is the traditional beer in the South Germany and contains over 50 % of wheat malt.The brewing with the peculiar beer yeast of weizen yeast produces characteristic fruity odor from the yeast. The main beer which was generally drunk in Japan at that time is Pilsner with bitterness. Weizen with sweet and rich taste was popular with particularly the females who love no beer, as the beer easy to drink. The staff is making effort to improve the quality every day to establish the standard position of "Weizen beer".